INPE-EM is a product of the Earth System Science Center (CCST) of the National Institute for Space Research (INPE), in partnership with several institutions. The estimates are computed using the generic INPE-EM modeling framework for emissions modeling (Aguiar et al., 2012), which combines spatially explicit maps of biomass and deforestation for a study area. The main feature of INPE-EM framework is flexibility in representing the emission processes, enabling a refinement of the estimates according to the data available:

The initial version of the framework, described in Aguiar et al. (2012), consisted of adapting the model “bookkeeping” proposed by Houghton et al. (2000) to a spatially explicit environment. The initial version of the framework represented the process of clear-cut deforestation in tropical forest areas and the subsequent dynamics of the secondary vegetation in those deforested areas. Several improvements have been incorporated into the framework recently. New parameters have been introduced to make it more suitable to represent the different practices adopted for removing the vegetation in different regions and types of vegetation, so that new applications for other Biomes could be developed (for instance, partial removal of the roots). Carbon pools related to the dead organic matter (dead wood and litter) were explicitly incorporated, being added to the dead organic matter generated by the deforestation process. Finally, in addition to estimates of CO2 emissions are also calculated emissions of CH4, N2O, CO and NOx. These estimates are now presented in an aggregate form (tables with annual totals) and also in a spatially disaggregated way, in regular cells (maps). The figure below shows schematically how we estimate the 1st and 2nd Order emissions in the new version of the framework. 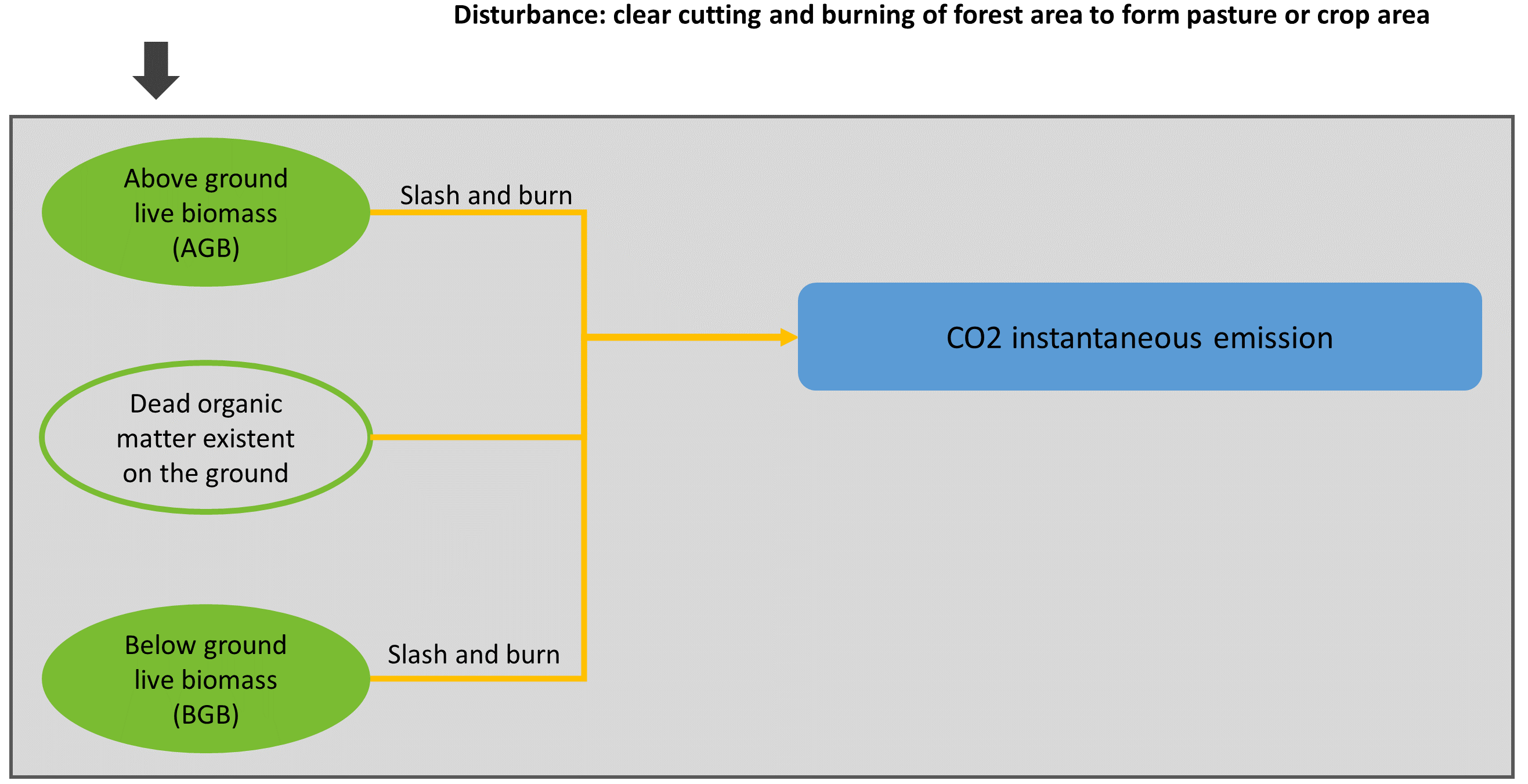 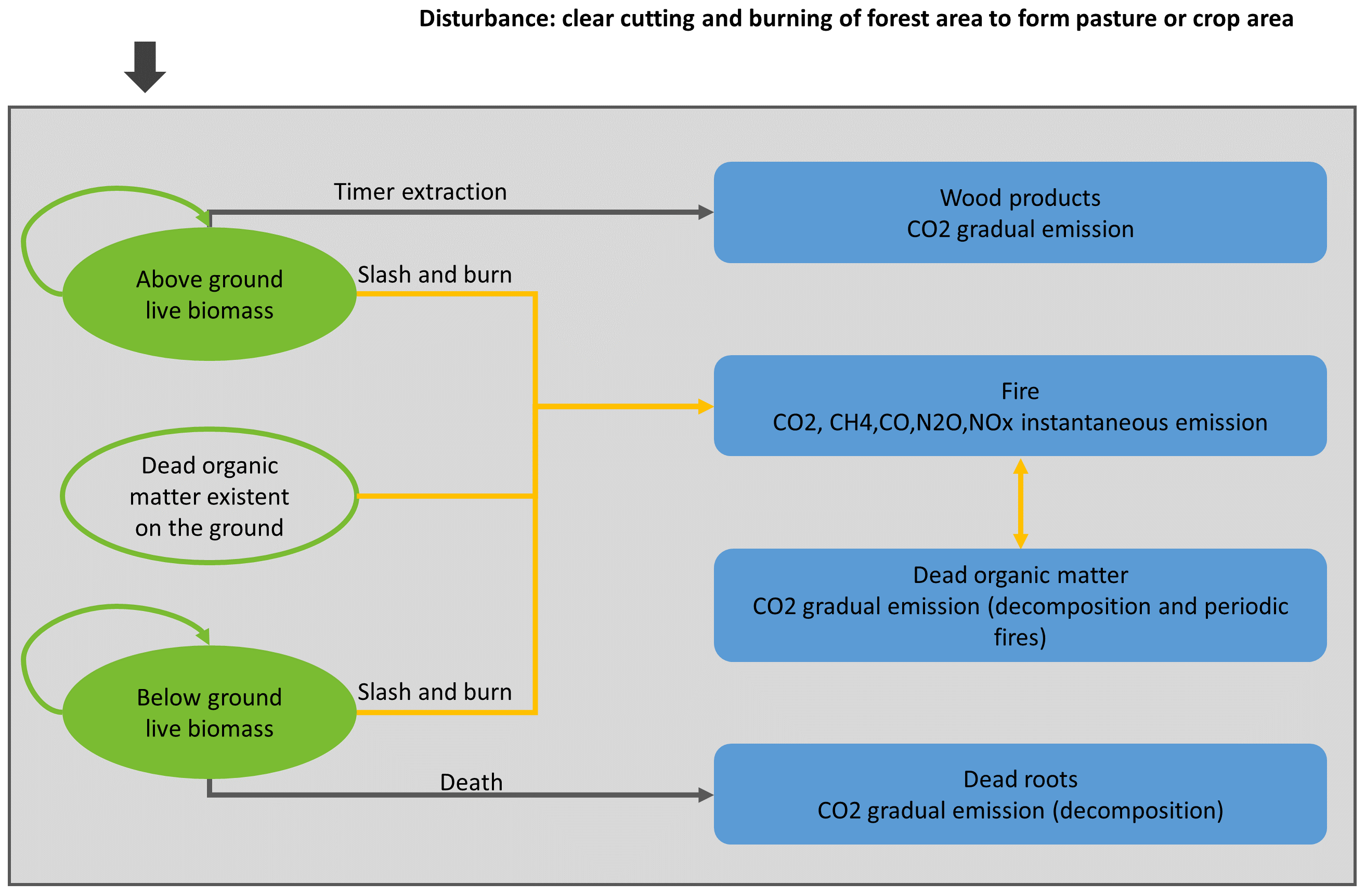 Estimates of 2nd order aim at representing more realistically the carbon release rate into the atmosphere over time – taking into account that part of the biomass is converted into wood products, part is burned, and part is left on the ground, suffering gradual decomposition field (above or below ground). On the other hand, 1st order estimates assumed the instantaneous release of 100% of the carbon above and below ground. In the case of CO2, emissions of 2nd Order consider the sum of components related to instantaneous release by burning (the living biomass and dead organic matter) to the gradual decomposition of elements of dead organic matter, wood products and elemental carbon. Emissions of CH4, N2O, CO and NOx are proportional only to the percentage of biomass burned. A version of the source code of the framework for 1st and 2nd Order of estimates is now available download.

INPE-EM 4.0 presents a new component to estimate greenhouse emissions due to forest degradation. This component implement 1st Order emmissions estimates and is the first atempt to incorporate forest degradation emissions into the estimates of clear cut and secondary vegetation of INPE-EM. Is this component biomass in each cell is dynamically updated as the result of subsequent forest degradation events (fires, selective logging), post-event regeneration. The biomass stock in a cell increases or decreases according to its degradation trajectory and the model calculates the corresponding emission / absorption. When a clear cut occurs in the cell, the model calculates the emission corresponding to this current stock of biomass. 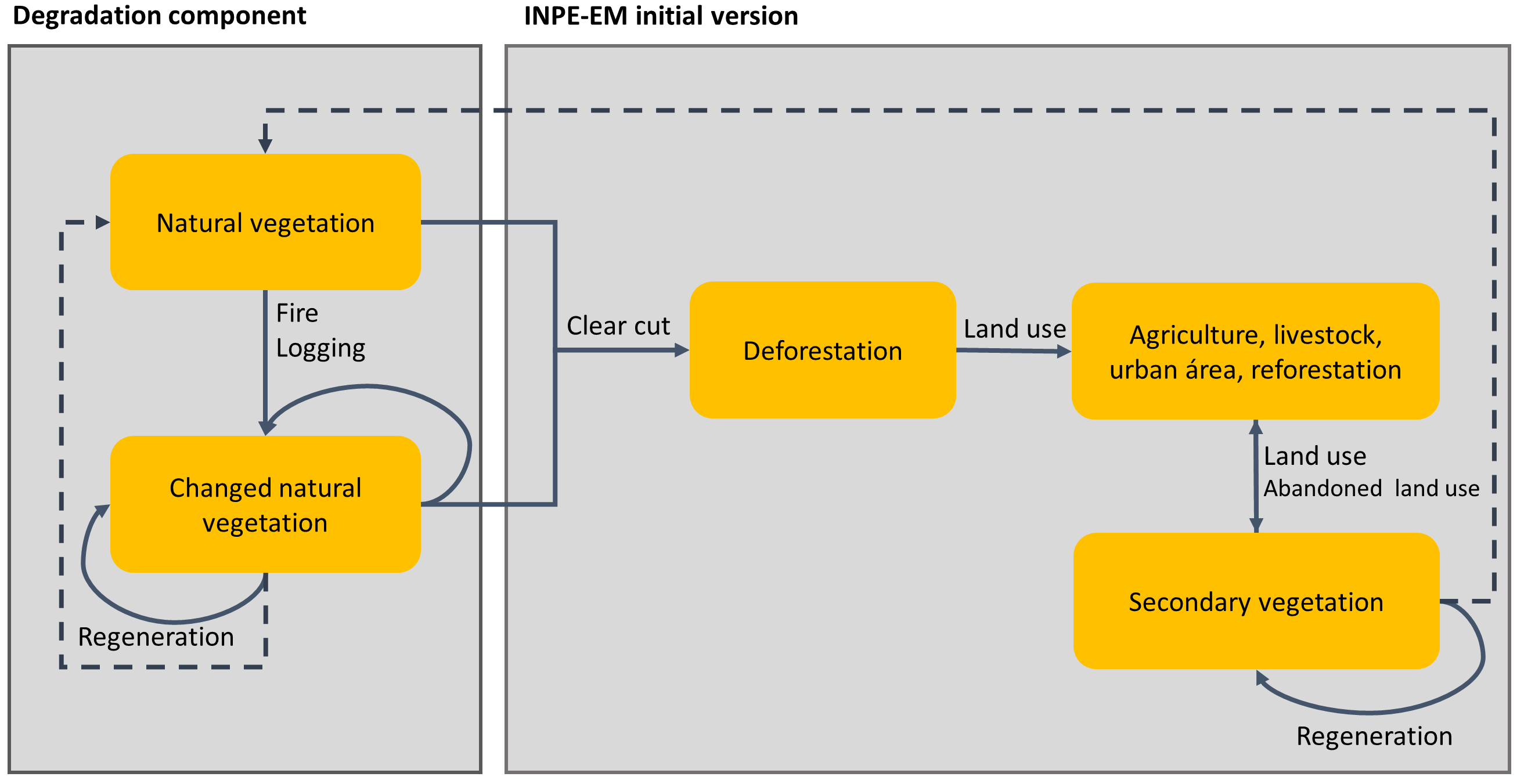